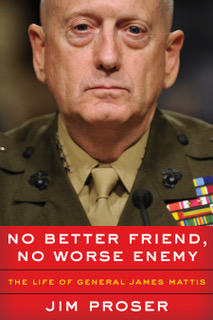 James N. Mattis was the first Trump presidential cabinet nominee and received nearly unanimous, bipartisan support for his nomination, with only one disapproval. He received a rare waiver of the guidelines that exclude recently active military leaders from the position of Secretary of Defense. What could create such unprecedented unity, even enthusiasm, in the hyper-partisan political rancor of 2017?

No doubt, the urgency of having a quick, smooth transition of military leadership was in play, but this easy consensus clearly has other dimensions. Beyond Mattis’ obvious military competence for the position, he evidently also possesses a personal integrity that fosters such universal confidence. Who is this man – underneath his General’s stars? It is this writer’s opinion that Mattis has lived at such an extraordinary level of self discipline and exhibited such selfless service to American ideals, that he commands a unique place of respect among modern day heroes.

This humble and deeply thoughtful man chose a path in life that brought him into mortal combat with the most barbaric evil of our time – Islamist terrorism. Yet he continues to defeat it with insight, humor, fighting courage and fierce compassion – not only for his fellow Marines who volunteer to follow him through hell’s front door, but for the innocent victims of war. He encouraged his beloved Marines in Iraq, “Fight with a happy heart and strong spirit.” He spoke plainly, from his heart, a warning to civilian tribal leaders of the Sunni Awakening in Iraq’s Anbar province, “I’m going to plead with you, do not cross us. Because if you do, the survivors will write about what we do here for the next 10,000 years.”