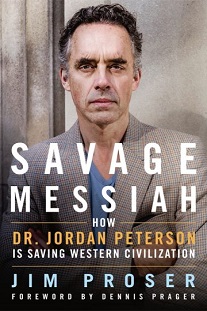 I discovered Jordan Peterson on YouTube and was immediately captivated by his use of language. There was a musicality to it. He spoke in a rush of barely comprehensible scientific concepts taken to a crescendo, and then stopped in a long, unexpected silence. He was speaking some form of elevated Canadian English. I stopped that first video and took a moment to digest what I’d just heard. I thought he was warning me about something called “postmodern Neo-Marxism” – whatever that was. I re-started the video from the beginning.

I saw that Peterson’s long unexpected silences were spontaneous moments of introspection, often in the middle of bursts of scientific observations. He was parsing his words, not to make them more palatable or to protect himself, but the opposite. He was making them more precise and frequently more inaccessible. He used phrases like “…the proper level of analysis” and “…agreeableness is one of the traits associated closely with creativity”. This was definitely over my head but he challenged me to keep up by interjecting a Will Rogers style plain-spoken reflection,

“So what what the hell’s going on here exactly? And why are we damn near at each other’s throats?”

He spoke in terms of psychometrics, an area of science that measures psychological responses. He colored scientific facts with his unique understanding of human nature learned from great minds like Carl Jung, Friedrich Nietzsche and Jean Piaget. He added the wisdom of great writers like Aleksandr Solzhenitsyn and Fyodor Dostoevsky. His shared his own pain openly without shame.

But finally, it was his profound sensitivity to human suffering and insights into the evil in every human heart that made Jordan Peterson unique and vital. I hope you will find here some solace in his words of wisdom, some inspiration from his heroic stand against overwhelming enemies and some relief from the undeserved suffering in your life.

Here’s a recent review of Savage Messiah from reader Nick Hoskot on Facebook; “Also, I want to recommend a book which I just finished reading called Savage Messiah, by Jim Proser. It tells the story of Jordan Peterson presenting a psychological portrait of the man and his ideas, his academic, political, and personal journey with his own depression and his daughter’s juvenile arthritis, his academic work as a psychologist at Harvard and U of T, and currently a public intellectual and warrior for truth in our world. I was totally blown away by the book. I had heard about Peterson and had even met and filmed him when he was in Montreal for a public lecture and award but this book gives you so much historical background about our current times that I found it quite astounding.”