“Through scientific experiment they’d demonstrated that there may be such a thing as a life force flowing through the universe – what has variously been called collective consciousness or, as theologians have termed it, the Holy Spirit.”
Lynn McTaggart, “The Field”

“They” who were demonstrating this “life force”  were the pioneers of quantum physics including Erwin Schrodinger, Werner Heisenberg, Niels Bohr and Wolfgang Pauli.  Author Lynn McTaggart further explains in her book “The Field” that they “…had some inkling of the metaphysical territory they had trespassed into.  If electrons were connected everywhere at once, this implied something profound about the nature of the world at large.  They turned to classical texts in their attempt to grasp the deeper truth about the strange sub-atomic world they were observing.  Pauli examined psychoanalysis and archetypes and the Qabbalah; Bohr the Tao and Chinese philosophy; Schrodinger, Hindu philosophy; and Heisenberg, the Platonic Theory of ancient Greece.” 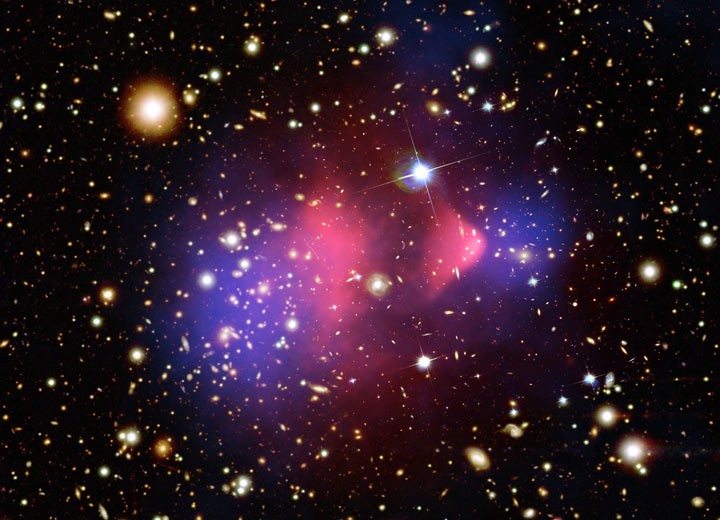 We might call this a spiritual quest.  Physicist Albert Einstein eventually concluded the quest by naming the ultimate reality that they were seeking, “The field is the only reality.” The name stuck and the most profound scientific discovery of the early 20th century that couldn’t be fully understood without researching holy texts was called simply, “The field.”

Okay then, that sums it all up, nothing more to see here folks.  Let’s move along.  Except another annoying discovery popped up later in the century.

“A cosmic mystery of immense proportions, once seemingly on the verge of solution, has deepened and left astronomers and astrophysicists more baffled than ever. The crux … is that the vast majority of the mass of the universe seems to be missing.”
William J. Broad, New York Times, September 11, 1984

Whoops!  That’s a bummer.   Uhh, excuse me Mr. Einstein and Mr. Bohr and you other guys, about that whole “field” thing… the linked up electrons and all that… I’m just asking now, but are you sure it’s actually there?  Like, does it actually exist and all, in reality sort of?

Dr. Stacy McGaugh, a professor of astronomy at the Case Western Reserve University in Cleveland, Ohio wondered about that too. “Is our Universe an unfamiliar darkness, filled with invisible mass, with the ‘normal’ matter of which we are composed no more than a bit of queer flotsam in a vast sea of dark matter and dark energy? Or is our inference of these dark components just a hint of our ignorance of some deeper theory? … Both possibilities have profound implications.”

Uhh yeah.  So then, is the belief in dark matter like faith in religion, where we can’t see God or detect him in any way but we know he’s there?

According to the Georgia State University, HyperPhysics site, “The dark matter is undetectable by any electromagnetic radiation at our disposal – we can’t see it in the visible range, can’t detect it by radio waves at the low end of the spectrum or by the xrays at the high end of the spectrum. It appears not to interact by the electromagnetic force. The obvious question is then “How do we know it is there?” For some 80 years we have known the answer to that – it interacts by gravity and thereby produces measurable results.”

Ok, something is there, we’re sure of it, we just can’t measure it by any means but we know it’s there, it’s a sure thing… there’s no other explanation.

Perhaps Albert Einstein summed up this new scientific mystery as well when he said, “God doesn’t play dice with the universe.”

So, according again to Einstein, who seems to understand most of this stuff, God and the Universe both exist, well that’s a relief.  And they seem to work together somehow.

Did we just find God, or maybe a part of him/her/it and maybe then someone just decided to call it Dark Matter… for now?