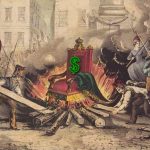 When Nixon closed the gold window in 1971, it was an instant in time that forever changed the global monetary order. It commenced the Post-Bretton Woods Era. One where there were no hard-backed national currencies, they would henceforth all float and jockey for position against each other (in many cases, actually incentivized to devalue themselves).
By Q1 2022 I had of course, fully drank the Bitcoin Kool-Aid and continue to do so. In fact, things have changed so radically in the last six weeks that I am now leaning further toward Bitcoin maximalism, where I wasn’t before. Further, where before I was highly skeptical that Bitcoin would ever become a reserve currency, the way I see it now, it’s a lock. ~ Mark E. Jeftovic