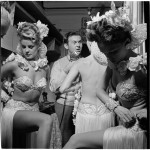 Before Stanley Kubrick was a film director (Lolita, Dr. Strangelove, 2001: A Space Odyssey, A Clockwork Orange and The Shining) he was a teenager in New York. In 1945, at the tender age of 16, Kubrick sold Look magazine a photograph of a broken-hearted newsvendor reacting to the death of President Franklin D. Roosevelt. He was […]